Music was the live wire of modern Nigerian culture in the 1970s and 1980s. Contemporary Nigerian music performers owe much of their better situations today to the pioneering work and stardom of the group of musicians that held Nigeria spellbound between 1970 and 1980.

The Hykers of Owerri; the Funkees with Jake Solo, Harry Mosco Agada, Sonny Akpan, and the lead guitarist Fela Dey;  Founders15 with their massive hit single, “Be My Own”; The Apostles of Aba, featuring Walton Arungwa and Chyke Fusion, whose song, “Drop out” and “Enyim” – a dirge on the Aba Market disaster of 1977 was a dance hall favourite of those years; The Aktion Band that found its paces in Warri, Lasbry Ojukwu’s Semi-Colon band in Umuahia with the immemorial single, “Slim Fit Maggie”; the likes of Dan Ian with monster hits like “Money to Burn” and “Fuel for Love”.

Sonny Okosun, who had lived in Enugu before his transition to Lagos, had a powerful song “Help”; The Wings (Ari Okpala, Spud Nathan Udensi, Charlie Duke, Manford Best, Emma Chinaka, Jerry Demua) whose “Tribute to Spud Nathan” was for many years a schoolboy anthem for my generation; The Black Children with “Love is Fair,” and “Satisfaction”; Wahehe Njoku and his Rock of Ages band; One World whose song “Victory” remains one of the finest songs ever played by a Nigerian group.

At the Lagos end were such superlative acts like the BLO trio of Berkeley Ike Jones, Laolu Akins, and Mike Odumosu; the Schoolboy band, Ofege, with unforgettable Melvin Ukachi on the vocals. This was of course a prelude to the 1980 eruption of Chris Okotie (“I Need Some”) and Jide Obi (“Front Page News”) straight out of the University of Nigeria, Enugu campus Law School. Dizzy K. Falola, Onyeka Onwenu and Oby Onyioha took the scene by the storm and changed the direction of Nigerian music in 1980.

By Obi Nwakanma.
Posted by emeksmusic at 6:58 AM 1 comment:

The Jackson 5 (later known as The Jacksons), an American popular music family group was formed in 1964 under the tutelage of their father Joe Jackson. The group was originally made up of five brothers: Jackie, Tito, Jermaine, Marlon and Michael. The last of the brothers, Randy joined them in late 1970s. Berry Gordy with his company, Motown Records played a vital role in making the group superstars in the early 1970s.
By 1975, most of the Jacksons opted out of recording any more music for Motown desiring creative control and royalties. The following year, the brothers parted ways to pursue their solo careers. Michael became very successful solo artiste with the bestselling record in the world “Thriller” to his credit.
The brothers reunited in the mid-1980s to record few albums and did some successful music tours. The Jacksons fame started to nose-dive again in the late 1980s. In 1989, five years after their last album, the remaining quartet of Jackie, Tito, Jermaine and Randy released the ill-fated “2300 Jackson Street”, which performed badly on the charts. After a brief promotional tour, the band went into hiatus. 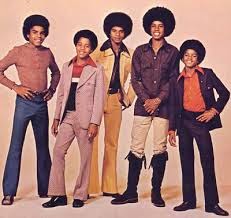 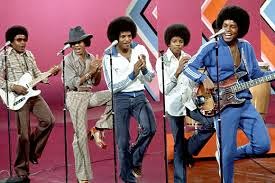 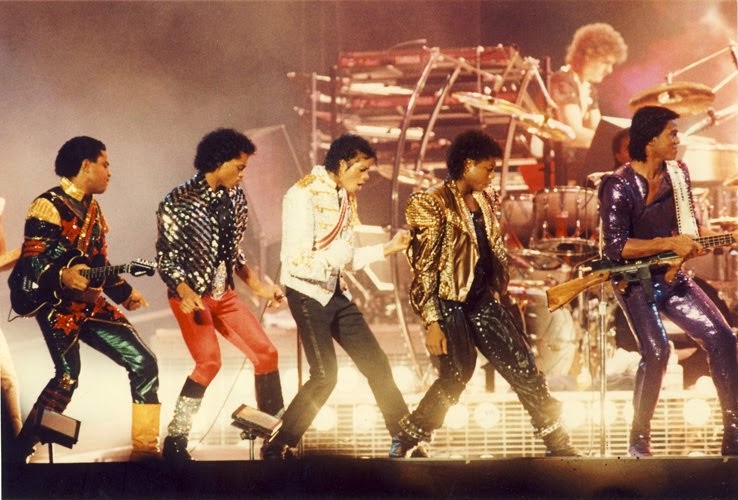 The Police were formed in 1977 by drummer Stewart Copeland, along with schoolteacher Gordon "Sting" Sumner and guitarist Andy Summers. Within a year, they were rock's next big thing, but tensions began bubbling over as Sting took control of the band. The others began to feel like his employees and they began fighting like crazy, even as the band got bigger and bigger.

After the hits "Every Breath You Take" and "Message in a Bottle," the English New Wave group disbanded in 1986 when lead singer Sting opted to pursue a solo career. In 2007, however, Sting once again teamed up with Stewart Copeland and Andy Summers to mark the band's 30th anniversary with an acclaimed world tour. 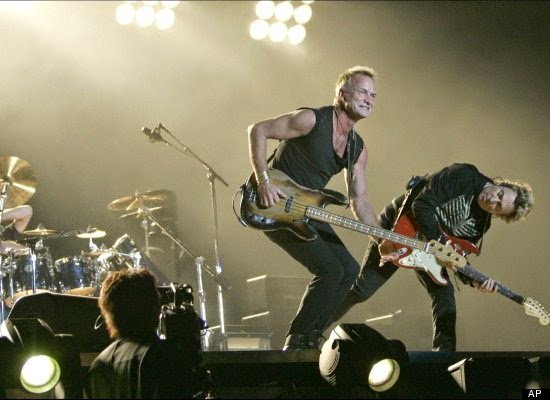 The Eagles, a classic American rock band was formed in Los Angeles, California in 1971. The Eagles hit their peak in the 1980s, but the success broke the band's dynamics. Original members Bernie Leadon and Randy Meisner had quit the band because of the chaotic and hostile environment.
Further internal friction lead to the 1980 breakup of the group, best known for their hits "Hotel California," "Desperado" and "Tequila Sunrise." At the time, lead singer Don Henley said the band would only consider reuniting "when hell freezes over." Fourteen years later, it seems like it did -- the Eagles performed to sold-out audiences again in 1994 for the "Hell Freezes Over" tour. 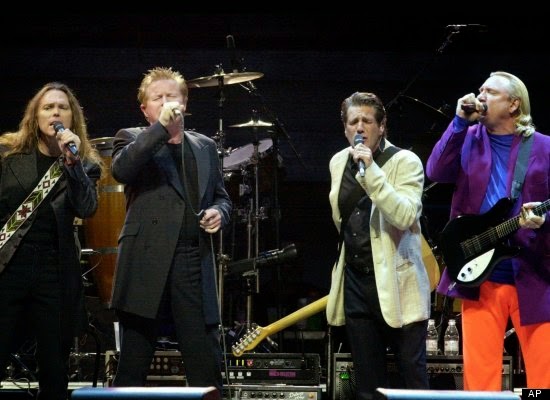 4. THE WAILERS
This Jamaican reggae group was known variously as the Teenagers, the Wailing Rudeboys, the Wailing Wailers and finally the Wailers. By 1966 Braithwaite, Kelso and Smith had left the band, which then consisted of the trio Livingston, Marley and Tosh (Neville Livingston being the birth name of Bunny Wailer).
Some of the Wailers' most notable songs were recorded with Lee "Scratch" Perry and his studio band the Upsetters. During the early 1970s the Upsetters members Aston "Family Man" Barrett and his brother Carlton (Carlie) Barrett, formed the Wailers Band, providing instrumental backing for The Wailers. The Wailers recorded groundbreaking ska and reggae songs such as "Simmer Down", "Trenchtown Rock", "Nice Time", "War", "Stir It Up
The original Wailers line-up disbanded in 1974 due to Tosh and Livingston's refusal to tour. Bob Marley formed Bob Marley and the Wailers with himself as guitarist, songwriter and main singer, the Wailers Band as the backing band, and the I Threes as backup vocalists.

Perhaps no other band's breakup is as legendary and shrouded in mystery as that of the Beatles. After a decade of enormous popularity, the group disbanded in 1970 when all four members began work on solo projects. Though John Lennon's burgeoning relationship with a Japanese-American artist Yoko Ono is usually cited as the primary reason for the group demise, the 1967 death of their manager, Brian Epstein, had already led to a series of financial and legal conflicts. 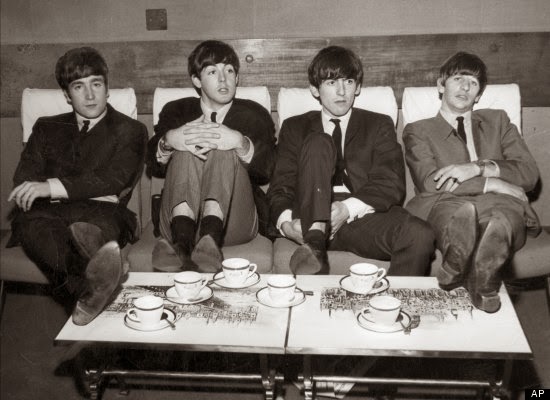 ABBA, a pop band from Sweden was the first pop group from a non-English-speaking nation to enjoy international stardom and success. The group last performed together in 1982, even though there was never any official announcement of a breakup. In 2001, the Swedish group (which has sold an astonishing 375 million albums worldwide) turned down a record $1 billion to reunite for a greatest hits tour. Can you beat that? 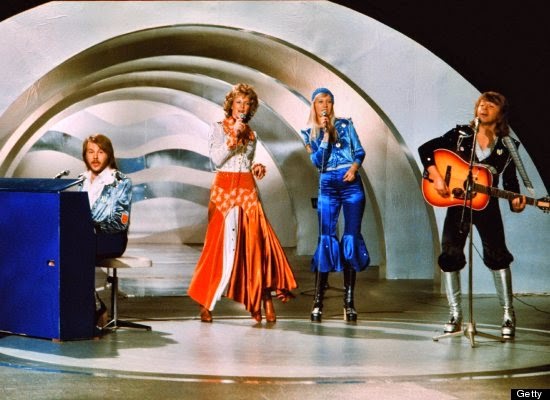 7. PLANTASHUN BOIZ
Platashun Boiz was a Nigerian hip-hop group made up of Ahmedu Augustine, Innocent Idibia and Chibuzor Orji. The trio have stage names as Blackface, 2face and Faze respectively. They started off in the late 1990s and had three hits – Body and Soul, Sold Out and Plan B – to their credit. But along the line, the band broke up and went their separate ways to launch solo careers.
2Face Idibia later became the only member of the band with a striving career. 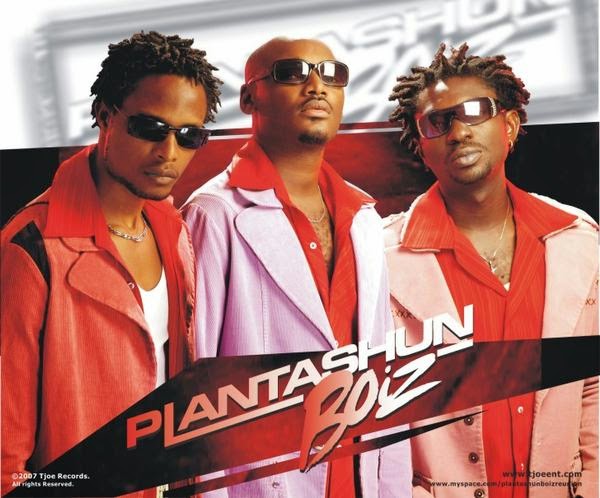 8. THE REMEDIES
The group was a trailblazer in hip-hop genre in Nigeria. Their first major hit song “SHADE” gave them a large fan base. The group comprised of Tony Tetuila, Idris Abdulkareem and Eddy ‘Montana’ Brown. Other songs like “Judile” and “Sakomo” launched them into real stardom. The group broke up in mid 1990s and each of them went solo. 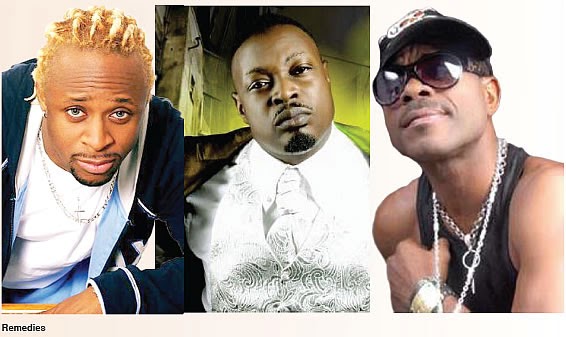 Posted by emeksmusic at 4:14 AM No comments:

Since Jude Engees Okoye, the elder brother/manager of the twins (Peter and Paul Okoye) Nigerian pop superstars P-Square twitted a controversial statement on his twitter handle, rumour has been going round that the band is planning a break-up. Jude had twitted "After over 10yrs of hard work, it's over. Am done."
Speculations are rife that the twins now fight over everything including songs, videos and ideas. Report from the grapevine has it that the twins had a physical fight on Wednesday 16th April 2014 forcing their dancers to intervene and pull them apart. Other reports claim that Jude is tired of wadding in, settling the constants spats or even sometimes being a party in the vicious arguments; hence his tweet.

L-R Peter, Jude, Paul Okoye
The P-Square twins are an international sensation with a story that spans back more than 10 years. They have won countless local and international awards, and are music idols worshiped by millions of fans around the world.
Nevertheless, if the twins break-up today, they will neither be the first nor the last music superstar group and band to break up.  Remember a popular saying "everything that has a beginning must have an end". If P-Square don't break up today, definitely they'll break up in the future!
Let's go down memory lane and see some of the superstar groups and bands that broke up: Jackson 5 (The Jacksons); ABBA; The Wailers; The Beatles; Kool & The Gang; The Commodores; New Edition; and in Nigeria: Jastix; Plantation Boyz etc.
We wish P-Square (Peter and Paul Okoye) happy more years together as a group, but if a break-up will end the incessant quarrels between them, especially now that they are married so be it.
Emeka E. Okeke

Posted by emeksmusic at 6:06 AM No comments: